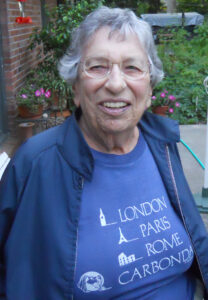 Anne Hill, 104, long-time donor, alumna, and former SIU staff member, passed away Monday, Feb. 15. One of her last acts was to endow a scholarship award through the School of Music honoring her uncle – the Carl Deis Music Composition Award Endowment.

She believed in the importance of the arts, and she had been involved in the local art scene since 1979.

Recently, she made her greatest impact with a $25,000 donation to the SIU College of Liberal Arts. The Carl Deis Music Composition Award Endowment, named after Hill’s uncle, who was a well-known composer, will benefit students in the School of Music.

“I have no idea what kind of music will develop in the next 25 years, so I leave that up to the students to set the pace,” Hill said in the weeks before her death.  “That makes an opportunity for them to advance the state of music in a way that will be directed by their prize-winning compositions.”

During her time in Carbondale, she was active in many university and community organizations, including the American Association of University Women and the John Thomas Strings Program. She has also been a donor to the McLeod Summer Playhouse and WSIU. She also helped establish the Southern Illinois Chamber Music Society.

“My grandfather immigrated here – he played trombone in the New York Symphony – because America needed music and musicians. This is still the case. We need to build audiences, too,” she said in a 2015 SIU Alumni magazine article. “I continue to enrich my own life in this community because I have made wonderful friends through the programs we have been able to serve in and support.”

It isn’t the first time Hill has given to the university and its students, but by endowing a fund, those gifts are made sustainable and will be given each year.