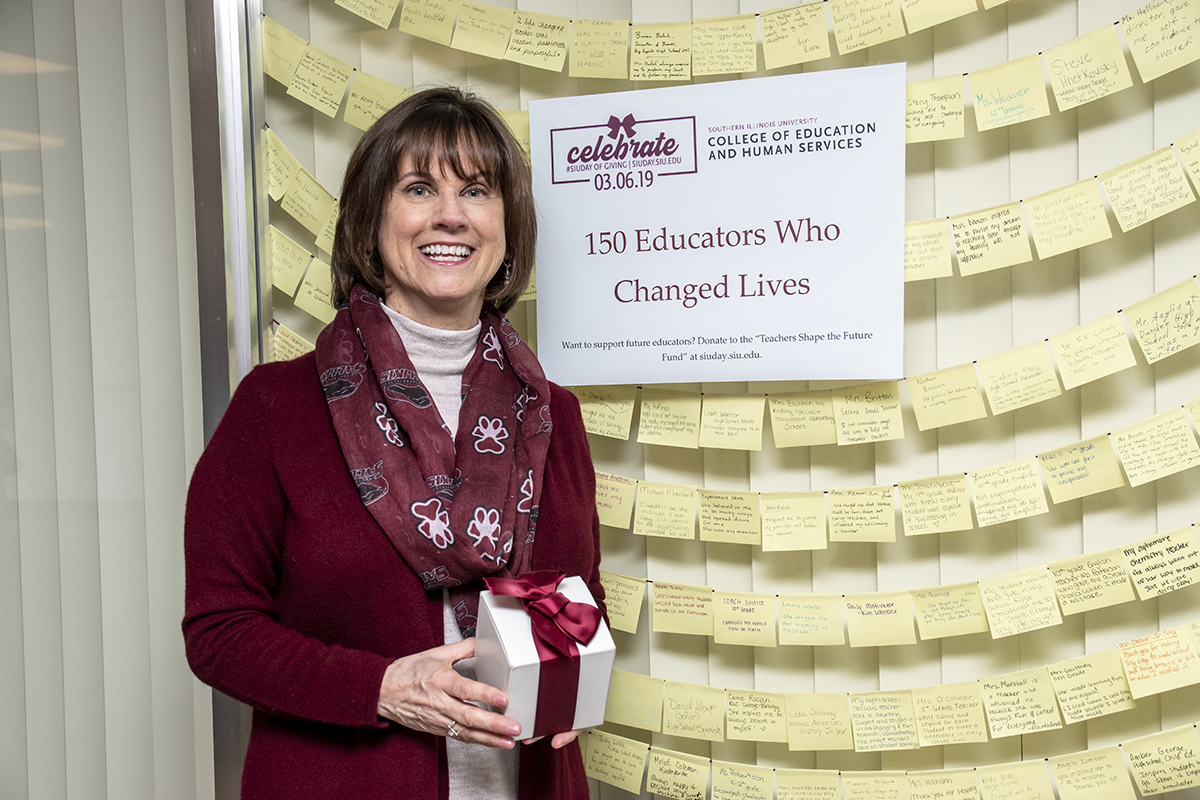 It may seem obvious to say education is the heart of a university, but at SIU, that statement rings especially true.

That’s why Nancy Mundschenk and her husband, Paul, established the Teachers Shape the Future matching fund for the SIU Day of Giving on Wednesday, March 6. They’ll be matching donations up to a total of $5,000 to benefit the Office of Teacher Education within the College of Education and Human Services.

“We’re so proud of the tradition here, but we’re also looking to the future,” said Mundschenk, director of teacher education.

With its roots as a normal school, which was the term used for colleges that focused on training teachers, SIU’s history is one based in educating educators. As the university celebrates its 150th birthday, Mundschenk wants to put the spotlight on the important role educators play.

When walking past the Office of Teacher Education in the Wham Building, one can’t help but notice the Post-it notes filling up the window. On each one, a current teaching candidate has written about an educator that inspired them.

“It’s really the rollout of a yearlong celebration,” Mundschenk said. “It’s a reminder that we’re surrounded by educators, and it allows us to demonstrate that in a very personal way.”

There are teacher prep programs throughout the university, and teaching candidates in each college would benefit from the Mundschenks’ matching gift. The money will help pay for several things, including students’ licensure tests, which cost $300.

“Education is a gift,” Mundschenk said. “It’s fundamental to a democratic society, and SIU plays a critical role in that.”

For more information about the Day of Giving or to make a gift, visit siuday.siu.edu/ehs. 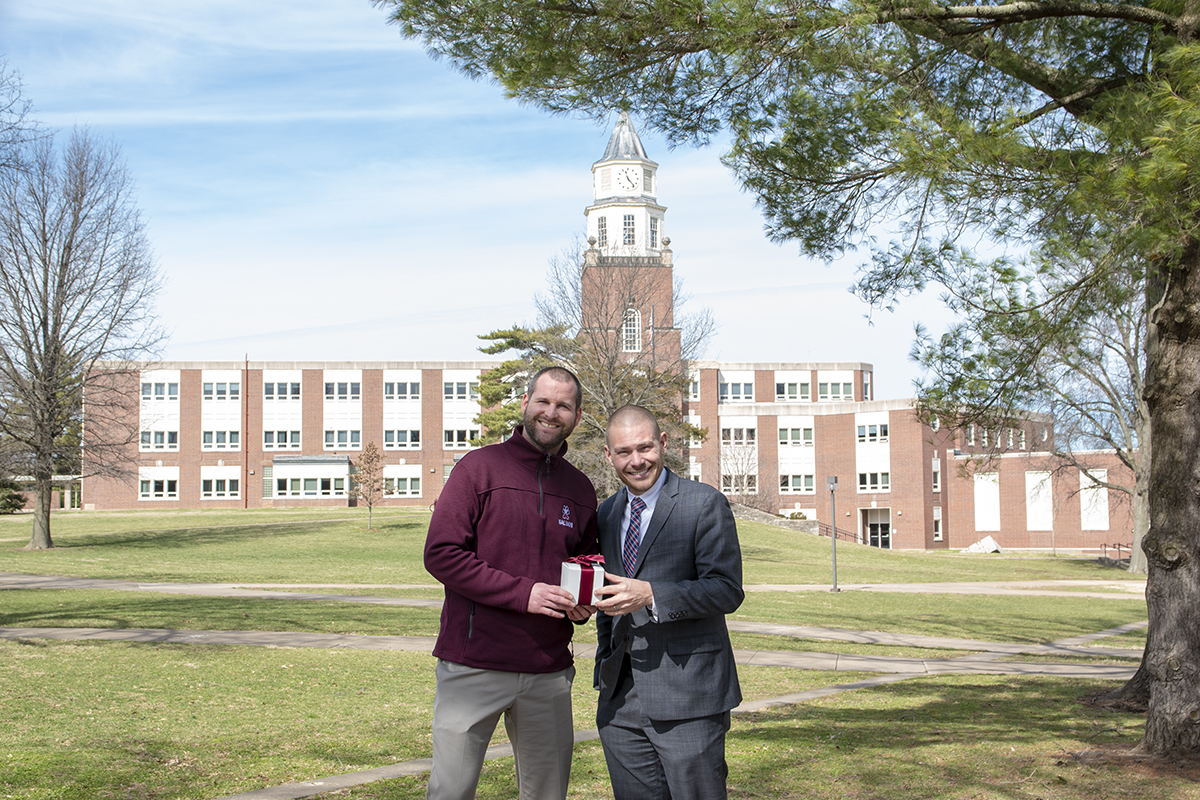 The SIU Department of Public Safety wants to add one more dog to a campus represented by dawgs, and it’s getting some help March 6 during the SIU Day of Giving.

“DPS seeks to acquire a K9 trained in explosives detection,” said Chief Benjamin Newman. “The K9 will be utilized during major events on campus. In the past, we’ve requested assistance from other agencies to provide this service.”

Paul Melzer and Ian Reinhart, both SIU alumni and Country Financial representatives, have chosen the department’s K9 fund for a Day of Giving matching gift.

Through Country Financial, the pair secured $3,000 in grants to be given to the fund. They’re encouraging others to match those dollars as the department attempts to raise $50,000 to fully fund the K9 unit.

“They’re a little shy of being able to purchase the dog,” said Melzer, who is a veteran of the United States Navy. “Our gift, with the help of those who match it, will get the department that much closer to beginning this process.”

Both men expressed the importance of supporting the campus police department.

“Small amounts of money can make a big dent,” said Reinhart, who is former law enforcement officer. “This is something that’s a little less heralded and deserves funding.”

A K9 unit would be utilized during sweeps of Saluki Stadium and SIU Arena before sporting events, areas for special events, other community events and areas subjected to bomb threats.

“An explosives detection K9 would be a benefit for the agency and the university,” Newman said. “We are seeking to fund this program specifically through donations.”

Melzer and Reinhart will be presenting a check to Chief Newman and providing lunch for the department March 6 on the Day of Giving.

“We believe in this stuff,” said Melzer. “They’re keeping folks safe. This is a proactive step. They’re going above and beyond.” 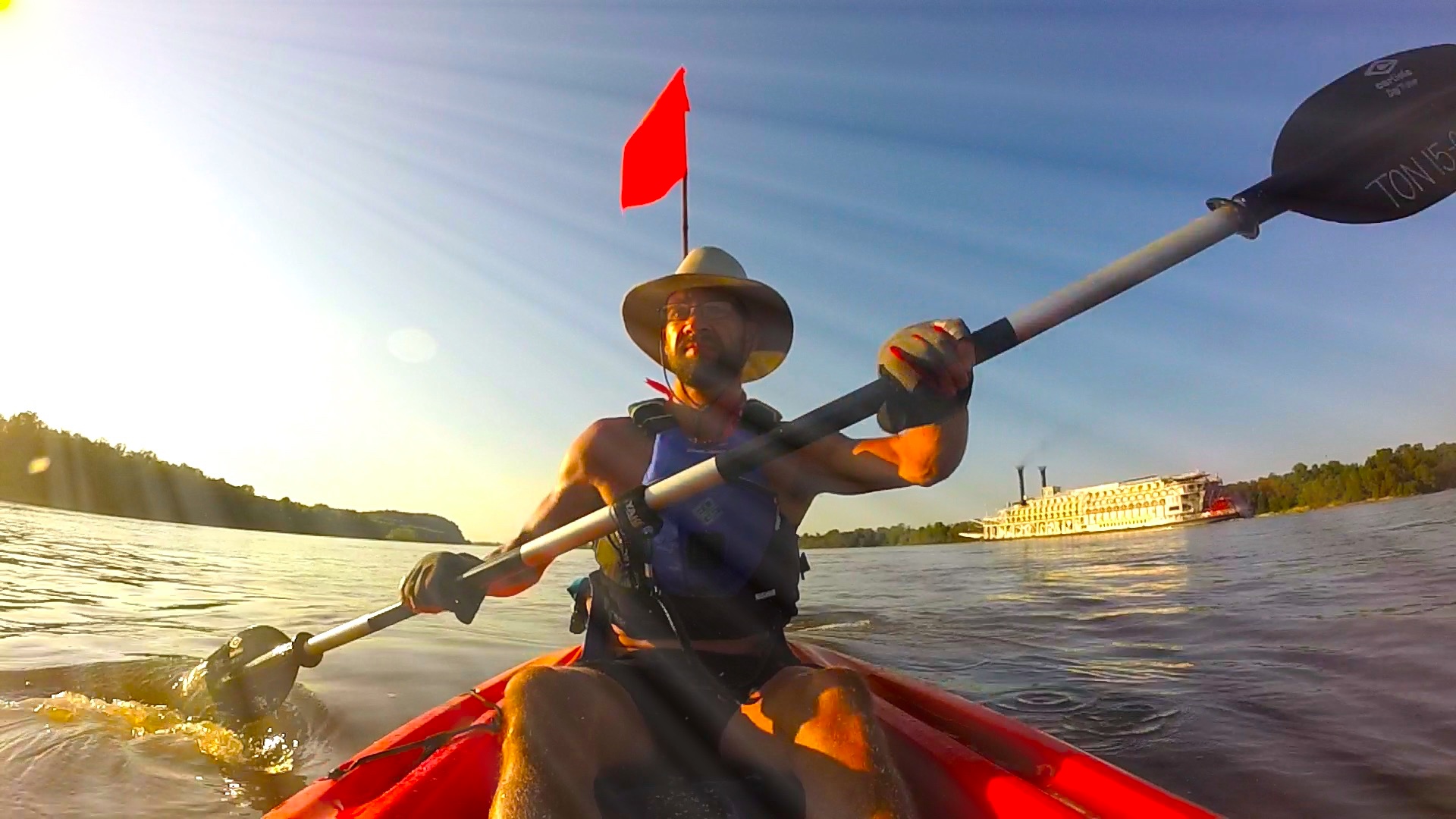 Greg Nejmanowski, like many SIU students, enjoys the great outdoors. Of course, he’s probably the only one with a plan to canoe the entire length of the Mississippi River.

That’s right, Nejmanowski is planning to hop in his canoe on May 24 in the Minnesota headwaters of the world’s third-largest river and paddle his way to the Gulf of Mexico. More than just a thrill-seeker, he’s doing it for a cause.

“We believe that through camaraderie, shared experiences, support and a common purpose, veterans can receive the tools necessary to navigate and overcome obstacles often encountered by those who have served our nation,” Nejmanowski said.

So, to spur donor support, he’s embarking a 2,300-mile trip down the mighty Mississippi. On paper, the plan is simple: Begin in Itasca State Park in Minnesota and spend two to three months canoeing down the river, camping on sandbars and gravel banks.

Of course, that’s an oversimplification of what the trip entails. Nejmanowski expects the journey to involve varying circumstances, including more challenging conditions at the beginning, avoiding barge traffic, navigating areas controlled by locks and dams and fast-moving water from Alton to the Gulf.

“I’ve been paddling my whole life,” he said. “Last summer, I did an adventure race (a multi-disciplinary event, including biking, paddling, hiking, etc.), and it lit a fire under me.”

The trip will take Nejmanowski through 10 states and several major cities. He will be reaching out to local news agencies along the way and make his pitch for support of Veteran Adventures.

“The relationships formed during high-intensity and challenging situations are some of the strongest humans will ever create,” Nejmanowski said. “Veteran Adventures aims to build those unwavering bonds with participants by providing challenging and adventurous opportunities that push them outside of their comfort zones.”

To learn more visit, ton.siu.edu/program-areas/veteran-adventures. To support Touch of Nature and Veteran Adventures during the SIU Day of Giving on March 6, visit siuday.siu.edu. 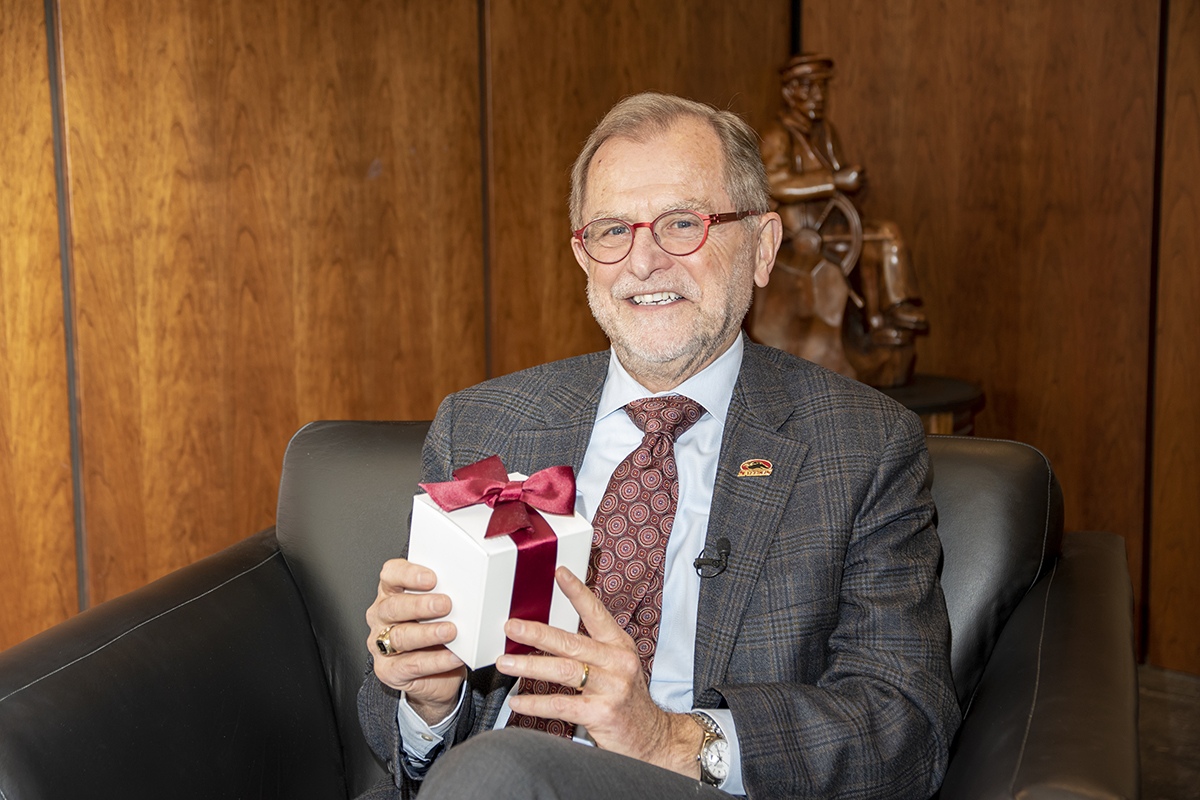 CARBONDALE, Ill. — Southern Illinois University Carbondale is launching a yearlong celebration of its 150th anniversary. The fun begins March 6 with the 2019 Day of Giving, an event rallying the university’s supporters from near and far.

“It’s very appropriate to launch the 150th celebration with the Day of Giving, because SIU’s success is tied to the many alumni and donors who have supported the university since it was founded,” Chancellor John M. Dunn said.

Appropriately, the theme of this year’s Day of Giving is “Celebrate.”

The count is on for 24 hours

The third annual Day of Giving is a 24-hour event held on the first Wednesday of March to commemorate the university’s Founder’s Day. Throughout the day, friends of SIU are invited to make online donations to the areas of SIU that they hold most dear.

Supporters can make a noticeable impact on the university and its students as they contribute with a campus-wide gift or by giving toward specific academic units, programs, scholarships or other areas that will enhance the educational experience for Salukis of today and tomorrow.

Reporters, photographers and news crews are invited to attend the big birthday gift box reveal, set for 2 p.m. on March 6 in the first floor rotunda at Morris Library. Carbondale Mayor John “Mike” Henry will read the city’s proclamation recognizing March 6 as the Day of Giving and kickoff for the university’s anniversary celebration. Following a special presentation and remarks by Chancellor John M. Dunn birthday cake will be served.

“The Day of Giving shines a light on the importance of philanthropy to benefit students and programs,” Rae Goldsmith, vice chancellor for development and alumni relations and CEO of the SIU Foundation, said. “Donors can support the areas they are most passionate about. Every gift, no matter the size, makes a positive difference.”

There are more than 150 areas and projects to choose from for contributions, including the new Saluki Alumni Plaza. Created to allow alumni and current students to gather and connect, the scenic area near Woody Hall will feature a sculpture of three Saluki dogs, representing past, present and future students.

The Day of Giving online tickertape begins rolling at 6 a.m. on March 6 and will run through 5:59 a.m. on March 7, tracking gifts to SIU. Giving booths will be set up in various locations around campus as well, offering people the chance to learn more about philanthropy and giving back to the university as they enjoy refreshments and have the chance to win prizes in hourly drawings. Contributions made at the booths will also be logged online.

And while the focus is online giving, donations, which are tax deductible as allowed by law, can also be made by calling 618/453-4900 or by sending checks payable to the SIU Foundation to Mail Code 6805, Carbondale, IL 62901. If sending a check to the foundation, indicate in the memo that the gift is for #SIUDAY and mark the area you wish to support.

“What is remarkable about this event, is that everyone comes together and feels proud to be a Saluki,” Rebecca Renshaw, associate director of communications for the SIU Foundation, said.

Day of Giving is just the beginning

The Day of Giving is the first of many special birthday events and plans at SIU.

Visit 150.siu.edu throughout the year to find out more about the book and all things pertaining to SIU’s big 150th anniversary celebration.

“A sesquicentennial marks an important point in the university’s timeline,” Dunn said. “It tells the world that we have a proud history and an impressive foundation to build upon as we embrace the future with optimism and commitment to the next 150 years. Clearly, it’s a time to celebrate our humble beginning and the national and international university we have become as we imagine even greater things to come.”