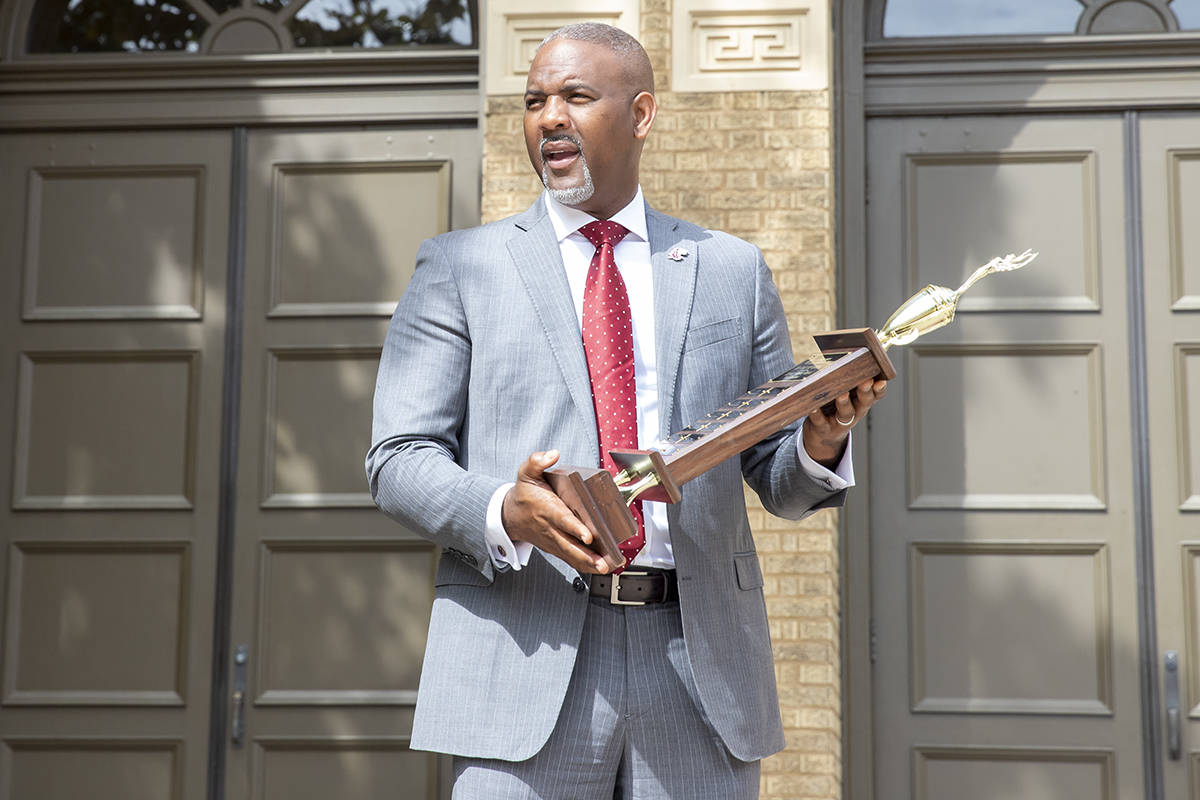 The SIU Day of Giving trophy presentation has become a tradition that puts an exclamation point on the annual fundraiser.

Each year, the SIU Foundation hands out five trophies honoring areas of campus that performed the best during the Day of Giving, but this year a sixth trophy was added. The winners are: 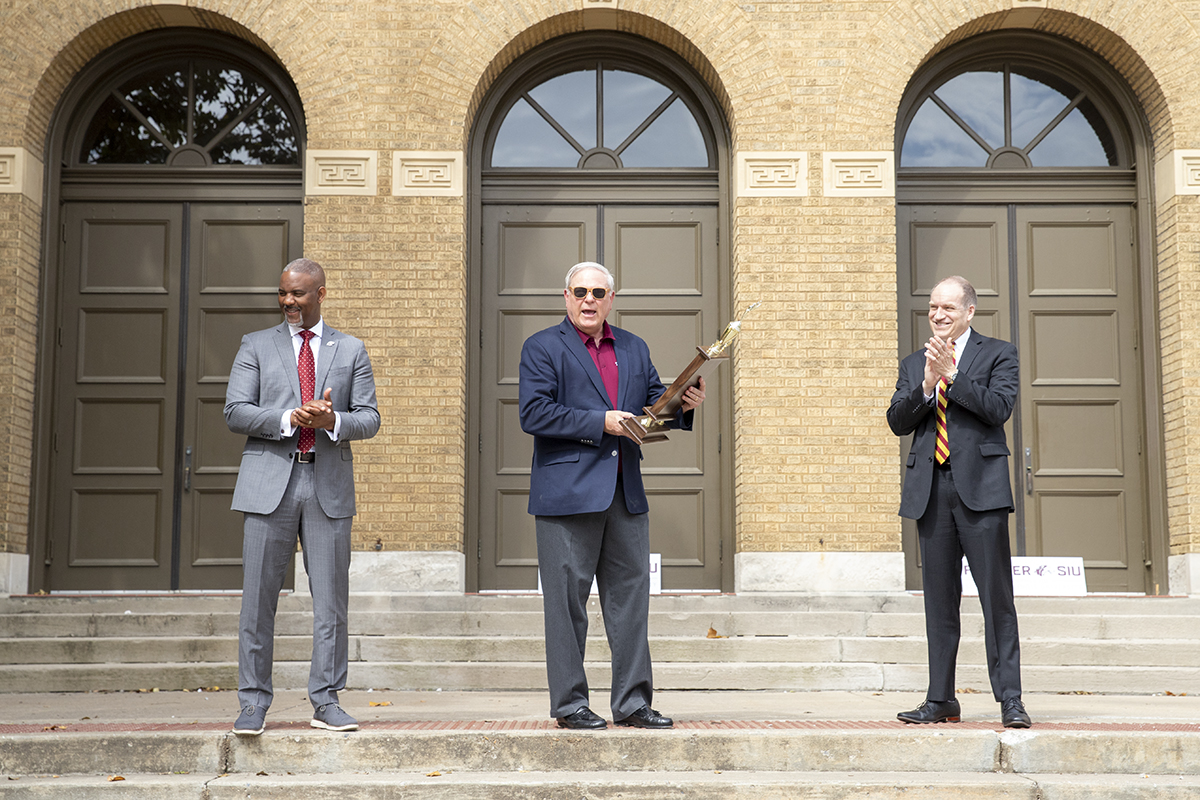 SIU Foundation CEO Matt Kupec kicked things off by expressing his appreciation for everyone involved in the Day of Giving and his excitement for the future of the Forever SIU fundraising campaign.

The most recent goal for the Forever SIU campaign was $200 million, but the Foundation recently surpassed that goal early, and the campaign was extended to 2028.

“This year, we set a Day of Giving goal of $3 million, and in typical Saluki fashion, we surpassed expectations by raising more than $3.5 million,” he said. “At the end of the Day of Giving, we kicked off the Saluki Takeover Tour in St. Louis, and Chancellor (Austin) Lane announced to the world that we would raise that goal to $500 million.”

The success of the Day of Giving and the extension of the Forever SIU campaign fit perfectly into the Imagine 2030 strategic plan set forth by Chancellor Lane.

“We don’t get to 2030 without your support, your energy, and your stories,” he said to the crowd gathered at the front steps of Shryock Auditorium. “I can feel the passion, the excitement, and the energy. We can get there, and that’s because of you, our alumni.”

President Dan Mahony and Chancellor Lane both came to SIU when the Day of Giving goal was a bit more modest.

“When I first came to SIU, the Day of Giving goal was $1 million, and we shot past that. At the time, Matt (Kupec) told me we could do even better, but I never envisioned we would be at $3.5 million,” he said. 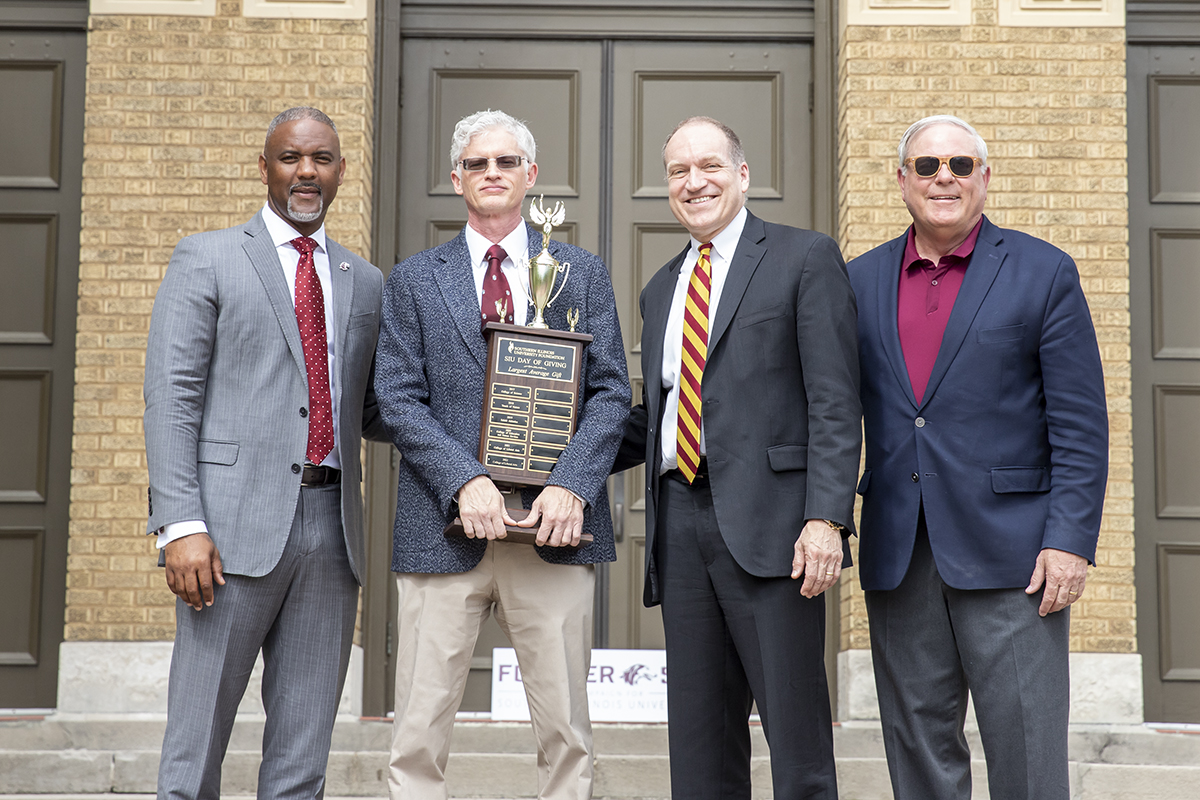 Andrew Balkansky, interim dean of the College of Liberal Arts, received two trophies during the ceremony. The college raised $723,265 on the Day of Giving and had the largest average gift.

“We made this a priority from Day One,” he said. “It takes a great team, and we have that here.” 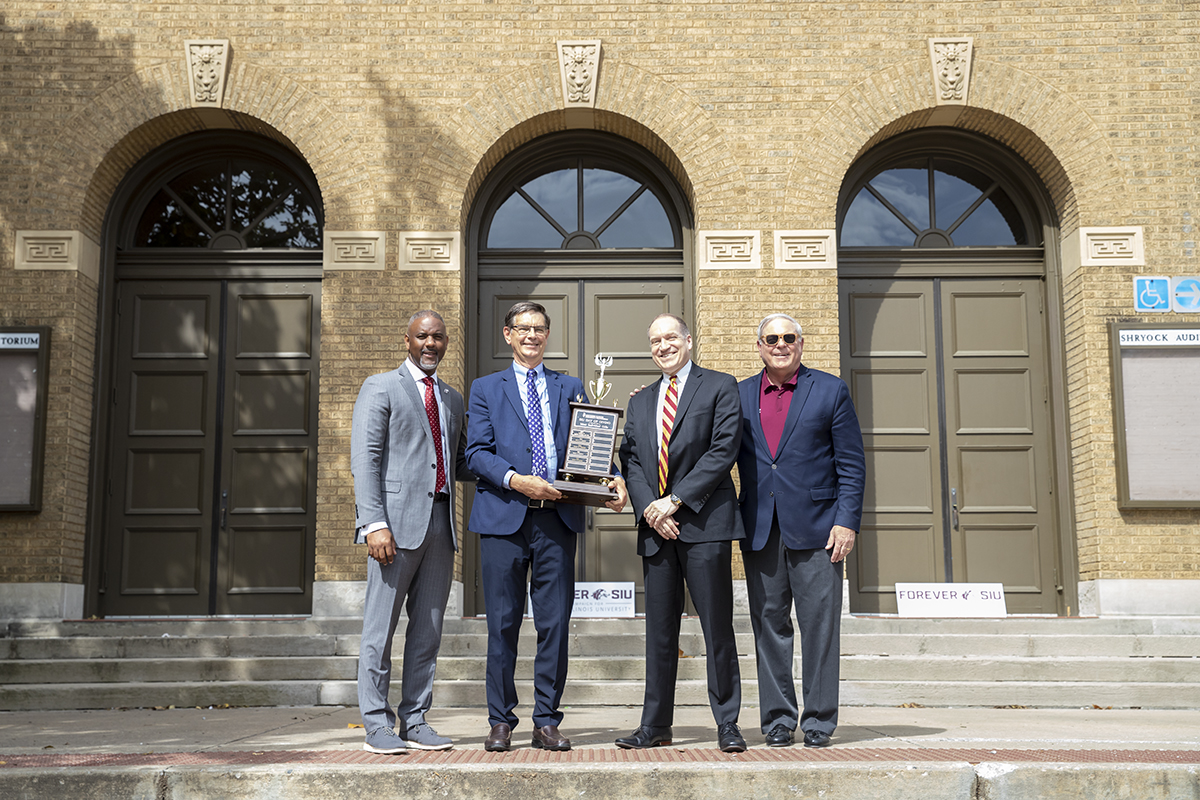 Dr. Jerry Kruse, dean of the School of Medicine, accepted his school’s trophy and promised to take it to locations across the state. The school had 372 individual donors.

“The best thing is the spirit of working together,” he said. “This will be a true traveling trophy.” 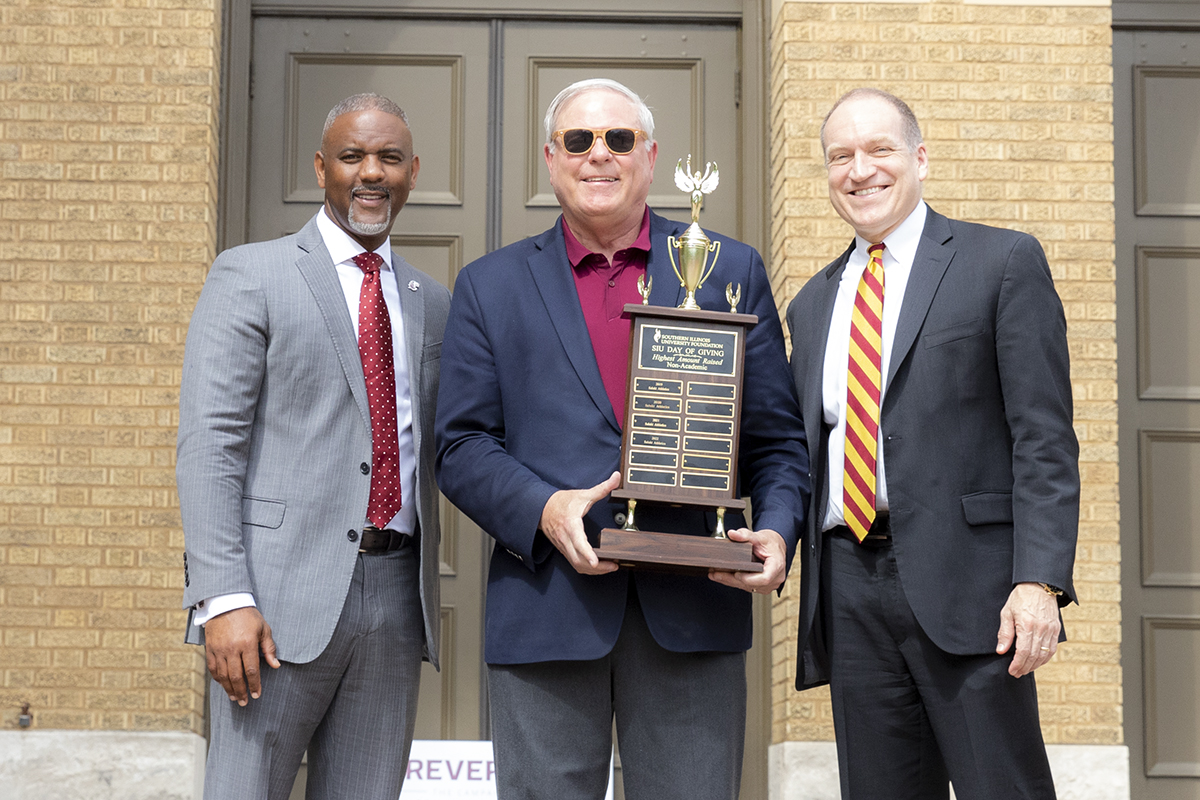 Saluki Athletics finished with a Day of Giving total of $109,645. Kupec, who is also the interim athletic director, was handed his department’s trophy by Chancellor Lane.

“The future of Saluki Athletics is incredibly bright,” he said. “You know what SIUC stands for – Southern Illinois University of Champions.” 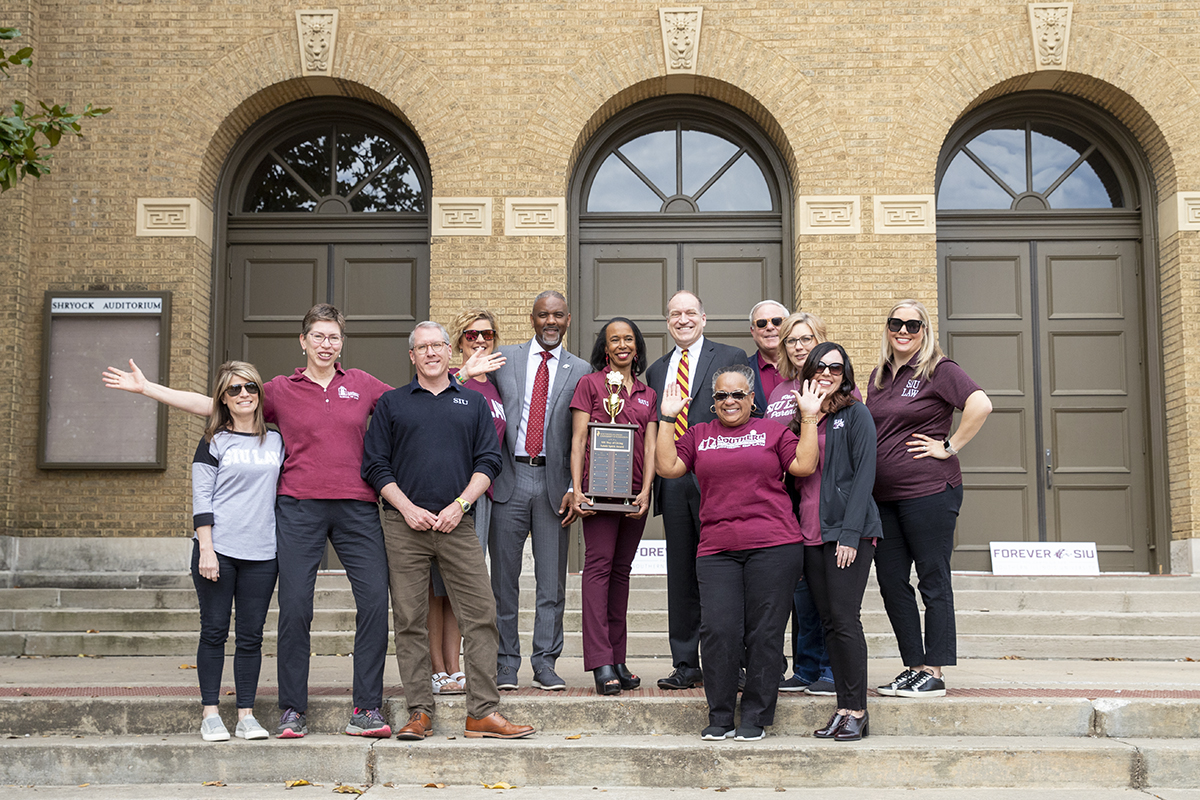 The School of Law earned the new Saluki Spirit Award, which honors the academic unit that saw the highest rate of alumni participation during the Day of Giving.

“Res ipsa loquitur. That’s Latin for ‘It speaks for itself,’” said Camille Davidson, dean of the School of Law. “We may be small, but we are mighty.” 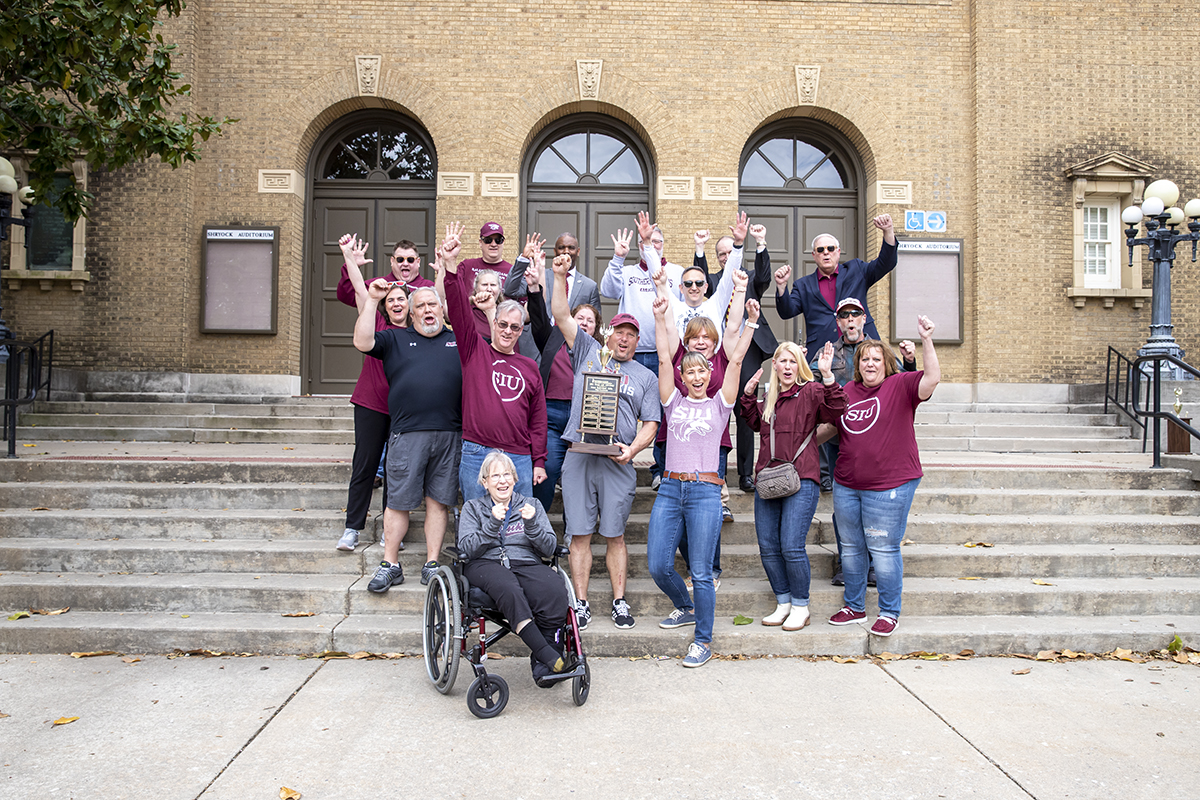 Represented by about 15 alumni, the group known for the B.E.E.R. Scholarship was honored with a trophy for the fourth consecutive year. This year, 698 individuals made a gift to the scholarship fund.

“The amazing thing about this one is how many people donate to it,” said Jim Raffensperger, who represented the group. “Small donations make a large difference. This year, there were six B.E.E.R. Scholarships awarded from this fund. Amazing.”

For more about the Forever SIU campaign, visit foreversiu.org.

Have the constant ups and downs of the stock market lately reminded you of a roller coaster? While a thrill ride in an amusement park may be fun, market volatility can make your head spin and stomach churn for completely different reasons. The good news is that opportunities exist to make a difference through your giving to benefit Southern Illinois University while also offering some potential financial advantages in your planning for the next tax season.

Even though the market is down from the highs of 2021, you may still have some considerably appreciated assets. If you make a gift of stock to the SIU Foundation directly from your brokerage account, you will likely bypass capital gains taxes and may also take advantage of a charitable deduction on your taxes next year. Even better, your stock is sold immediately and turned into student scholarships, faculty development, facility improvements and more at Southern Illinois University.

Some donors use appreciated stock as a basis for a charitable gift annuity (CGA). With a CGA, you receive an annual annuity payment, largely tax-free, with a portion of your gift going to the SIU Foundation at the end of your life. When funded with appreciated assets, you avoid capital gains taxes and may take advantage of a charitable deduction, while benefiting from an annuity based on the current price of the stock when it is gifted to the SIU Foundation. In uncertain financial times, many donors appreciate the constant source of income from the annuity, while also knowing that their gift will ultimately support the mission of Southern Illinois University.

Donors who are 70.5 or older and have an IRA have one more win-win option available: giving through their IRA as a Qualified Charitable Deduction (QCD). A QCD, sent directly from your financial institution to the SIU Foundation, ultimately reduces your income tax obligations related to your required minimum distribution (RMD). While seniors don’t have to take an RMD until they are 72, the option to make a QCD begins at age 70.5.

Want to learn more about how you can find win-win solutions that may provide tax-wise solutions for you and benefit SIUC? First, always consult your financial advisor to learn how these ideas may impact your personal financial situation. Then, for more information about giving through the SIU Foundation, contact Kathryn Sime in the SIU Foundation gift planning office: kathryns@foundation.siu.edu or 618-453-4268.