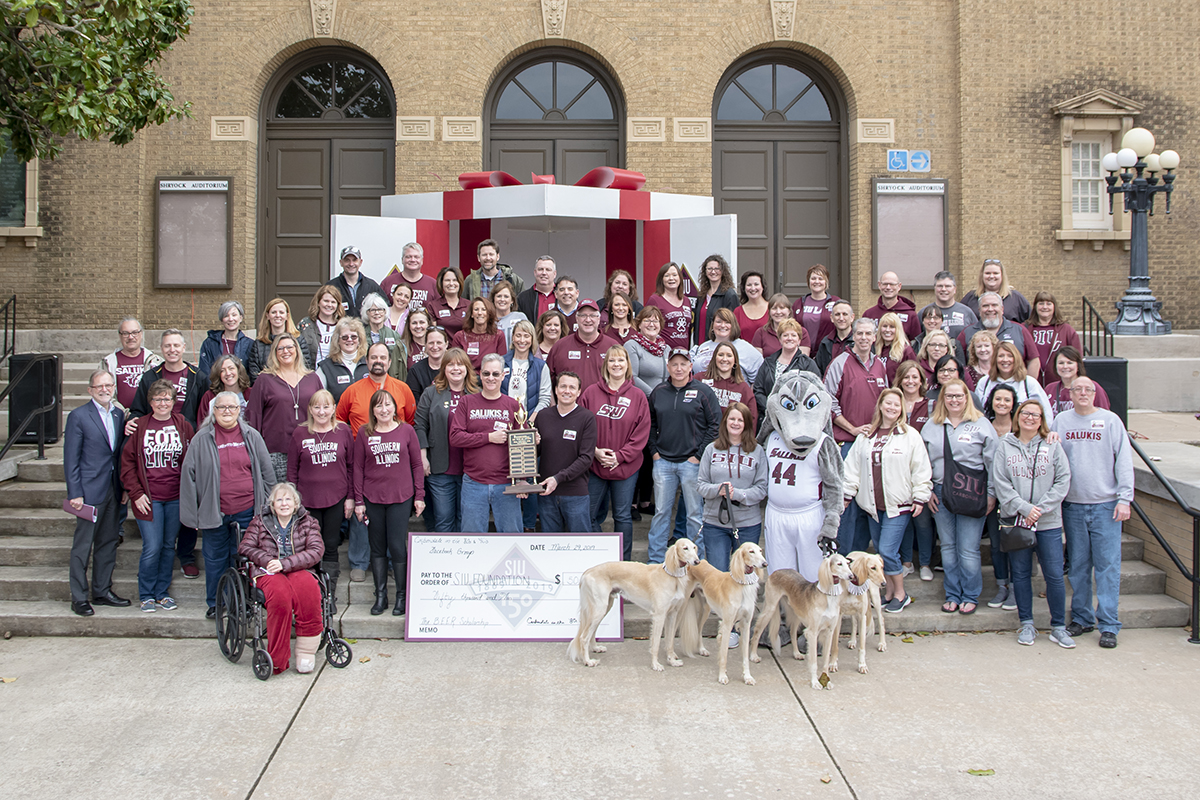 In January 2019, Dan Giedeman, a three-degree SIU alumnus, posted this now-famous comment in the private Facebook group called “Carbondale in the ’80s and ’90s.” The group, started by Craig S. Wilson in November 2018, swelled to nearly 15,000 members within three months.

Giedeman’s idea to raise money for a scholarship dovetailed perfectly into SIU’s Day of Giving on March 6. With the added excitement of the university’s 150th anniversary kickoff celebration, members of the group banded together and donated. The outpouring was phenomenal.

Jim Raffensperger, a member of the Facebook group, named the scholarship as a joke that brought a smile to many alums — The Balancing Education, Experience and Reality (BEER) Scholarship.

“I mean, what college kid doesn’t drink beer?” Raffensperger joked. The name stuck, and the group rallied behind it in a viral fashion. Nearly 1,100 people from the group donated more than $50,000 to create two endowed scholarships for students.

A ceremony on the steps of Shryock Auditorium held Friday, March 29, commemorated the creation of the scholarship. Many members of the group traveled from other states. One person who hadn’t been back to campus in over 28 years traveled from South Carolina to be part of the ceremony.

Giedeman, who traveled from Michigan, presented Chancellor John M. Dunn with a check for $50,000 from the group. Weeks after the presentation, donations continued to pour in.

Dunn presented the group of about 100 people with the Day of Giving trophy for most individual gifts for a non-academic unit. Dunn said he has always been impressed by the amount of pride at SIU, and it was evident in this group’s turnout.

“In the history of humankind, the really great people — the Mother Theresas, the Albert Schweitzers — have always reminded us that true happiness can only be obtained through giving,” Dunn said. “You represent that in spades, and I’m very, very proud of you. Thank you.”

Raffensperger said alumni came to the university for the education but left with memorable experiences, lifelong friends, and sometimes their soulmates.

“We’re all back because we came to love SIU and southern Illinois,” Raffensperger said.

Many who came to witness the celebration also took a tour of the campus, and some brought their high school children to take a look at all that SIU has to offer. That evening, a group took the trophy to several Carbondale establishments for bragging rights.

As well as raising funds for the university, Giedeman and Raffensperger said the Facebook group created a space for alumni to find opportunities to support current students with mentors and internships. The group also encourages former students to finish their degrees at the university.

The trophy will be shared among the group throughout the upcoming year. The trophy was scheduled to travel to SIU Days at Busch Stadium and Wrigley Field in June. 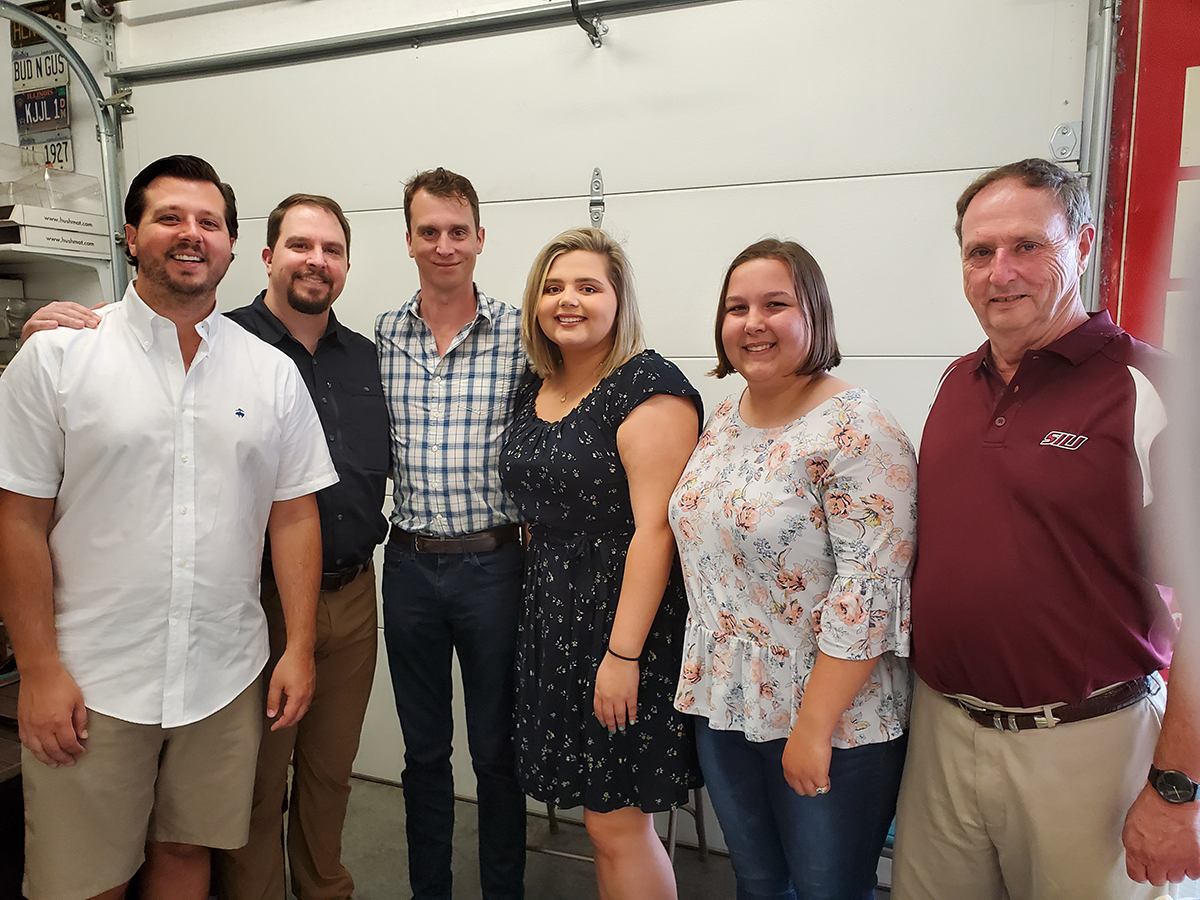 On Saturday, June 8, the family of Barb Brown held the annual garden party at the Leavitt family farm in Ellis Grove to raise funds for the Barb Brown Memorial Fund. Proceeds of the fund will be used to continue the service and teaching legacy of Dr. Brown.

Mikayla Cain was a recipient of the scholarship and attended the event. “It was a lovely event and it was nice to get to know Barb Brown’s sons and learn more about Dr. Brown,” Cain said.

The scholarship recipients received a DVD which contained a documentary about Dr. Brown’s run for state senate. Brown passed away May 5, 2016.

“Dr. Brown was a force to be reckoned among women and in southern Illinois politics. I feel so honored to receive her scholarship,” Cain said.

A senior, Cain is majoring in political science with a minor in journalism. Her plan after graduation is to serve as a congressional constituent caseworker where she will act as a liaison between constituents and federal agencies.

Cain says the scholarship will make a big difference in her life. “Since I am an independent student, this scholarship will help me tremendously. I won’t have to take out extra loans to get by,” Cain said.

Southern Illinois University Carbondale’s Touch of Nature Environmental Center received a special donation from the SIU Credit Union today at Freeberg Hall in Camp 2. Several SIU employees, staffers, and Touch of Nature supporters came out to share in the enthusiasm and attend the presentation.

Kim Babington, vice president of community outreach presented a $10,000 donation check to J.D. Tanner, director of Touch of Nature. The funds will go to support programs and activities.

“This generous cash donation is definitely an enhancement for SIU and we appreciate SIU Credit Union’s support. More importantly, we are honored the community is recognizing the value of the work we do here at Touch of Nature,” Tanner said. 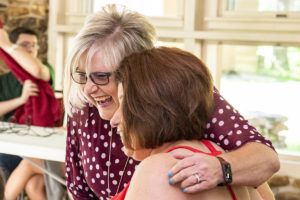 The check was presented in front of staff and campers who are enjoying spending time this week at the outdoor experiential learning facility.

“SIU Credit Union supports the Carbondale community and Touch of Nature is a big part of this community. We want to contribute to all of the great programs and activities that are offered here at Touch of Nature,” Babington said.

For more information about Touch of Nature, their programs and upcoming events, visit ton.siu.edu. If you would like to provide support, visit https://siuf.org/giving/college-unit/touch-of-nature.php. 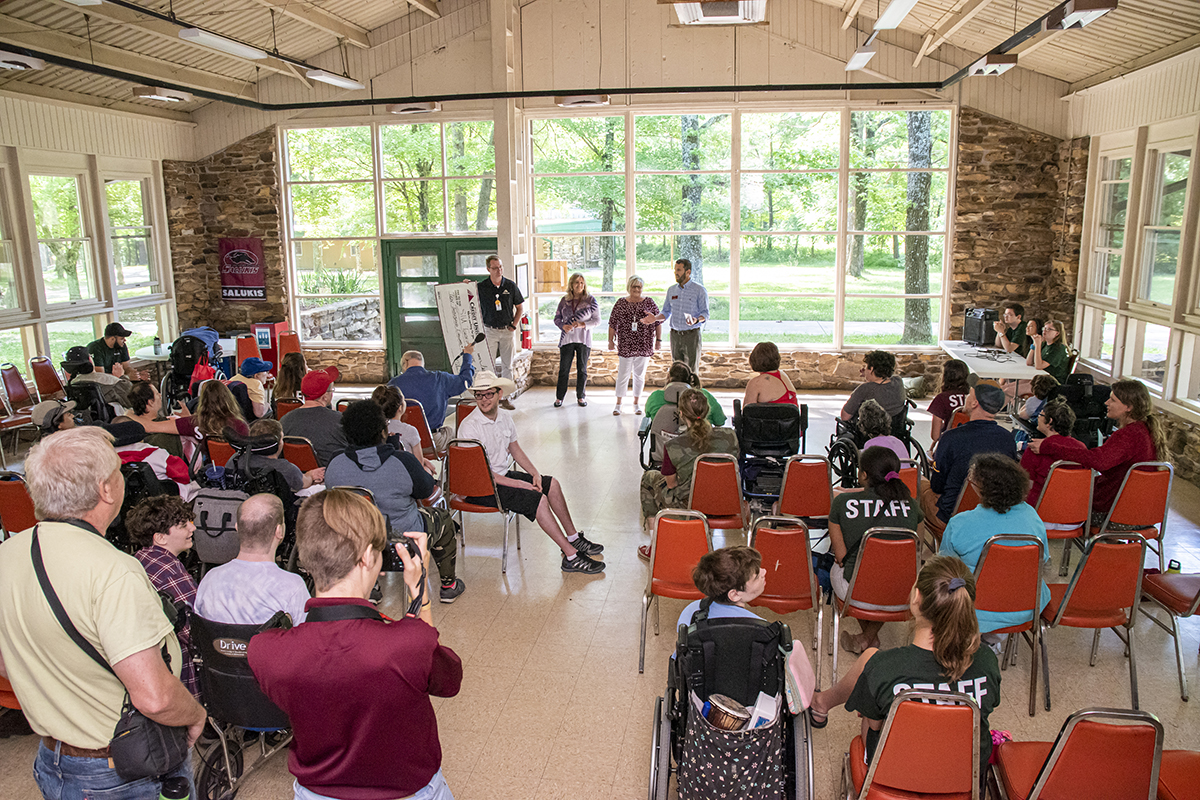 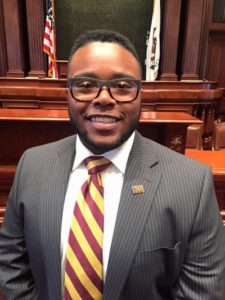 Ryan Gougis is living proof of the adage, “Nine-tenths of education is encouragement.” Raised in south Chicago, Gougis did not come from a wealthy background.

“I faced adversity growing up and there weren’t a ton of resources in my community to help. But inside my household, my parents encouraged me. They always told me that education is the key to escaping hardship so they were very supportive of me attending SIU Carbondale,” he said.

During his junior year at SIU, Gougis came into contact with the Paul Simon Public Policy Institute when someone encouraged him to apply for an internship. He knew it would be a great way to get a feel for the workforce and build up his resume, so he applied, interviewed, and ultimately accepted the Gene Callahan internship.

“The internship involved working at the state capitol in Springfield to gain experience working in state government. From day one, I was thrown into the mix of actual work. I would draft press releases, write letters to constituents, and assist in the process of government before legislation would be sent to the governor. It was eye opening and exciting,” Gougis said.

After graduating in May 2016 with a Criminal Justice degree, Gougis accepted a job as a program specialist with the Illinois House of Representatives. “Because of my affiliation with the Paul Simon Public Policy Institute, I am always running into a fellow Saluki in Springfield. It gives me a real sense of connection knowing that I am part of a family.”

Besides his parents support, Gougis credits the Paul Simon Public Policy Institute with giving him the keys to opening doors of opportunity for his career.

“There are so many students who are pursuing success but they just don’t have the key. Paul Simon Public Policy Institute gave me that key. The people there were and still are supportive of my career. It’s like a family model. Once you are a part of them, wherever you are in life, even outside the walls of SIU, they are always there to support you. I still get calls from people like Dr. Baker or Carol Greenlee checking in to see how I’m doing.”

Gougis is also active with his fraternity, Phi Rho Eta, a group that promotes the principles of pride, respect, and excellence. Their national program, Mentor Teacher Brother engages youth from single-parent homes or disadvantaged backgrounds and helps mentor them to set the standard of manhood and exemplary positive behavior.

“I really want to pay it forward and give to those who may not have come from the best environment. Because I had encouragement from my family and the Paul Simon Public Policy Institute, I am a living testament as to how philanthropy can change the life of a young man. I would highly encourage donors to give to the Institute.” 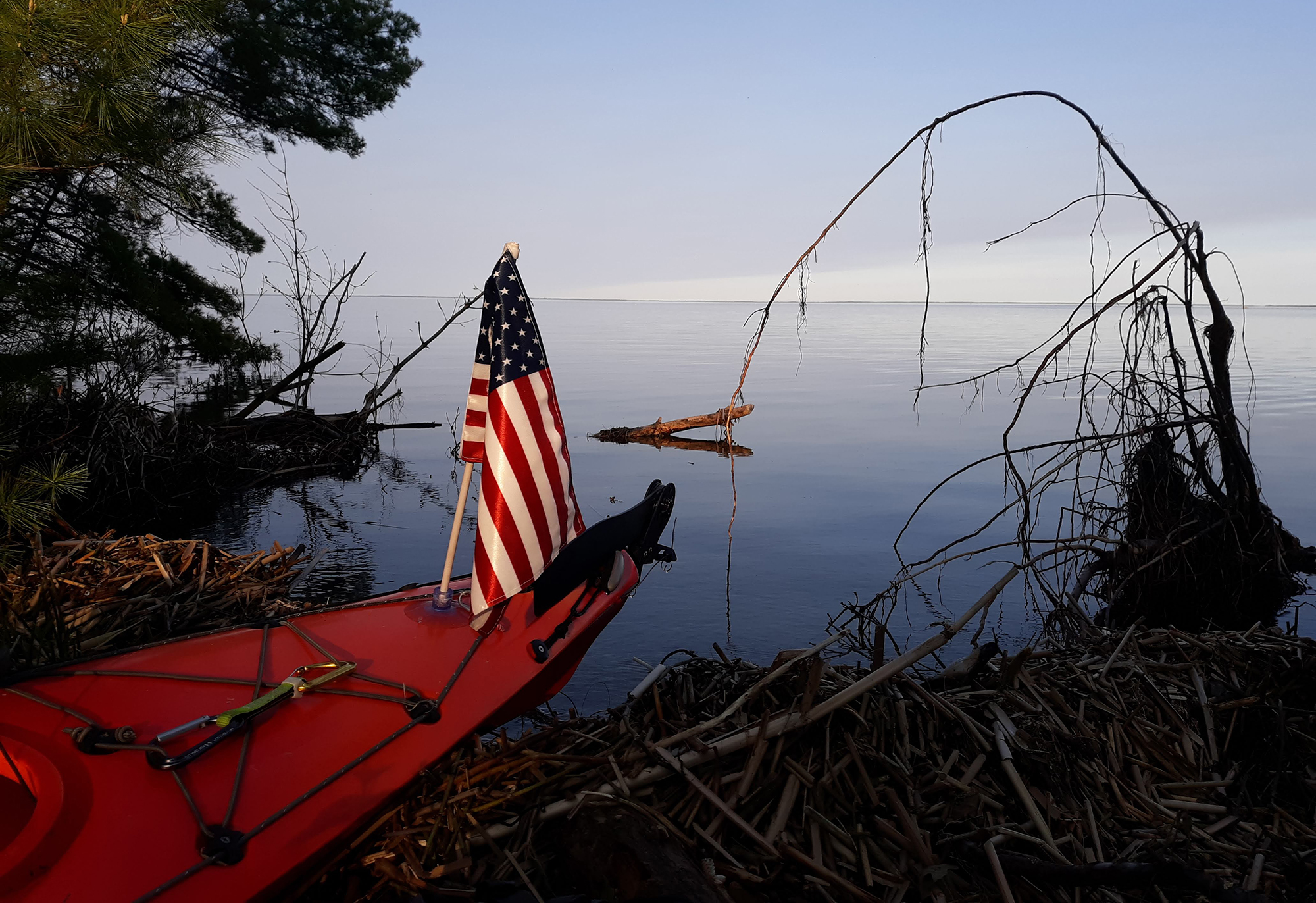 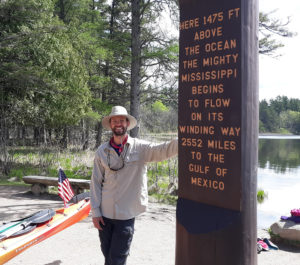 Rising waters on the Mississippi River won’t stop Greg Nejmanwoski, but they may slow him down.

“There are some closures to all recreational boating along some of the sections of the Mississippi,” he said via email on June 5. “Fingers crossed, I’m hoping they will be lifted as I approach in the later days of June. If there are sections of the river closed by the time I paddle to them, I’ll wait it out.”

Nejmanowski is canoeing the entire length of the Mississippi to raise funds for Touch of Nature’s Veteran Adventures program and bring awareness to other issues that affect veterans.

Donations can be made by visiting the Paddle for Patriots SalukiFunder page at https://salukifunder.siu.edu/project/15565.

As of June 5, his expedition down the Mississippi River had taken him a good distance through Minnesota. The 2,300-mile trip down the mighty Mississippi began in Itasca State Park in Minnesota and will end in the Gulf of Mexico.

“This project has been my baby,” said Nejmanowski, an SIU alumnus, Touch of Nature graduate assistant and Veteran Adventures coordinator. “It’s definitely been a lot of work, but I think it’ll be worth it and then some.” 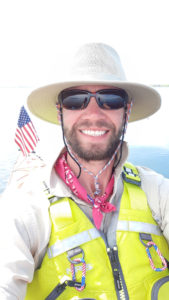 There are two planned events happening along the way, floodwaters permitting.

The first will be from 11 a.m. to 3 p.m. July 6 at The Loading Dock in Grafton, just north of St. Louis. There will be food and drink for sale and raffles, including a free chance at a Discovery Flight, which allows participants to briefly take the controls of an in-flight airplane.

The second will be from noon to 3 p.m. July 13 at Devil’s Backbone Park. The same raffle opportunities will be available.

“There are no back-up plans for the two events if they don’t happen because of water issues,” he said. “There is a potential for pushing them back, but I’m not too sure about that yet.” 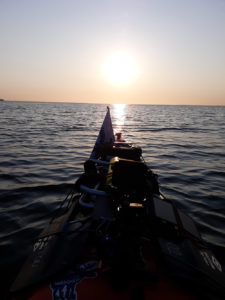 Nejmanowski hopes he can raise awareness not only of Veteran Adventures, but of the needs to veterans everywhere, including the scourge of veteran suicides.

According a 2016 report by the U.S. Department of Veterans Affairs, an average of 20 veterans die each day from suicide. That’s approximately double the suicide rate of non-veterans.

“We all know from anecdotal evidence how going outside can help you,” Nejmanowski said. “I feel like sometimes medicine has advanced and progressed so far that we have left nature — some of the best medicine in the world — behind.”

To get involved or support the trip directly, send an email to paddle4patriots@gmail.com. To learn more about Veteran Adventures visit, ton.siu.edu/program-areas/veteran-adventures.