When John Jones entered his first class with professor Brad Hagy he made an immediate impression.

“He sat in the front row,” said Hagy, a senior lecturer of information sciences and technology at SIU. “He was a model student and was going to do anything to further his future.”

Jones, who worked in IT for the SIU Foundation, passed away suddenly on Tuesday, April 27, 2021.  In Jones’ memory, Hagy donated $10,000 to establish the John E. Jones Memorial Scholarship. The scholarship will benefit non-traditional students who are majoring in Information Technology (ITEC).

With the large donation from Hagy and support from numerous donors through the SIU Foundation’s crowdfunding platform, SalukiFunder, the scholarship was recently endowed with $25,000. The scholarship will produce a $1,000 scholarship each year.

During the 2022 Spring Commencement, Jones was honored with a posthumous Bachelor of Science from the College of Engineering, Computing, Technology, and Mathematics. Members of Jones’ family attended the ceremony to receive his degree.

“We offer our sincere condolences to the family and share your pride in his accomplishments,” Chancellor Austin Lane said.

To make a gift to the John E. Jones Memorial Scholarship, visit salukifunder.siu.edu/johnjones.

‘He wasn’t just a student’

The 37-year-old Jones was one semester away from earning his bachelor’s degree in information technology. He made straight A’s and was on the Dean’s List every semester.

“I want to promote what John loved,” Hagy said. “He was working to better his life. I want to help students like John.”

Jones had started his college career in 2002, but he left school after his father passed away. He returned to SIU more than 14 years later determined to get his degree. In an email to Hagy after the Spring 2020 semester, Jones shared his appreciation.

“The one thing that we all lose is time, and there is not a way to get that back,” Jones said in the email. “So, in my journey, I was fortunate enough to meet people at SIU that reminded me of myself as a young man fresh out of high school living carefree and people that are willing to help anyone who gives their time to learn. Mr. Hagy you have made this transition from working full-time to full-time student one of the best experiences I have ever had.”

Reading that message, in which Jones goes on to express his hopes for the future, Hagy can’t help but become a bit choked up.

“John understood time,” he said. “He knew he had lost time, but he was still willing to go back and get his degree. In that email, he was speaking from his heart and for his future.” 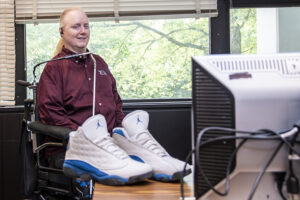 Hagy spoke at Jones’ memorial service and has remained close to Jones family, to the point that Jones’ mother gifted a pair of blue and white Air Jordan from his shoe collection that matched the color of Jones’ motorcycle. They were both members of the Carbondale Eagles 2569 Eagle Riders motorcycle club that has an annual charity ride for the Southern Illinois Special Olympics.

“Those shoes are now on the shelf in my office,” Hagy said. “He wasn’t just a student. He was a great person, a friend.”

Born and raised in Carbondale, Jones exceled in math and information technology. More than anything, Jones is remembered as a family man.

He is survived by his son, Jerald Cameron Jones; and fiancé, Tamara Buchannan-Boens; and her sons, Christopher Buchannan, Warren Eanes, and Dominique Boens. He is also survived by his mother, Debra Johnson-Jones; sister, Raven-Iman Jones; grandmother, Barbara Sanders; and a host of aunts, uncles, and cousins.

Jones enjoyed participating in American Poolplayers Association competitions, riding his motorcycle with his fellow Eagle Riders, shooting targets at the gun range, and working on and building computer/robotics systems.

After his planned graduation, the SIU Foundation was set to make Jones a full-time member of the IT staff.

“We thought the world of John,” said Matt Kupec, CEO of the SIU Foundation. “He was liked by all. His words and his actions were always consistent. Everyone at the Foundation was deeply saddened by his untimely passing. Professor Hagy’s inspiring gift is a testament to their connection and the impact they had on one another.”