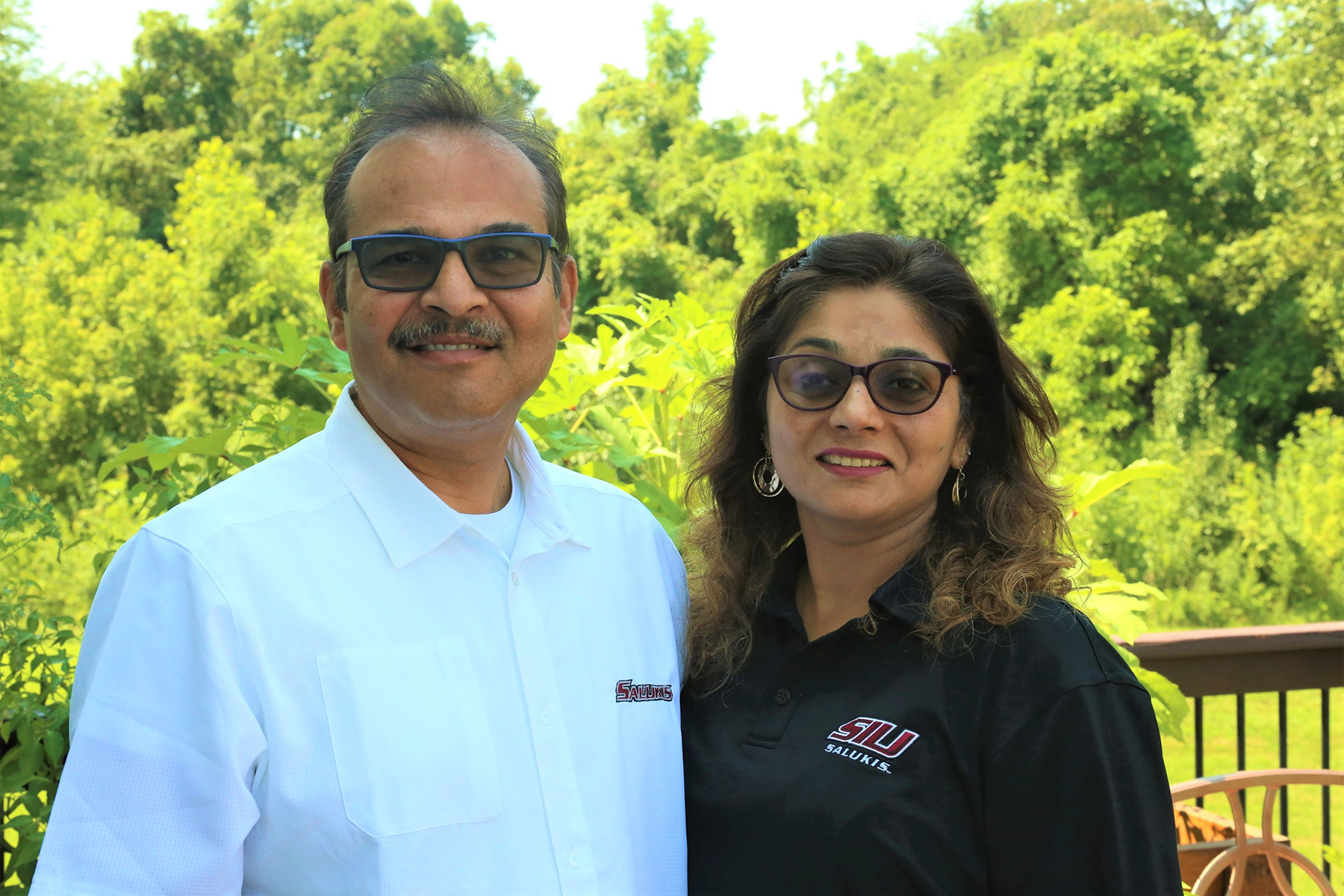 Dr. Atmesh Sinha brought his family to Carbondale in the early ‘70s to start the department of mining engineering at SIU, and retired 25 years later before moving to St. Louis, where he and his wife, Chinta, still reside.

Sunil, the eldest of their three children, spent many summers in Carbondale while attending school and college overseas and was able to experience small-town life revolving around family, community and helping others. As he grew up and pursued his dream of getting a medical degree, he never forgot the community that raised him.

Sinha and his wife, Rupali ’96, have recently established a five-year pledge at $10,000 a year to support the College of Business.

“There was a particularly challenging weekend of being on call where I covered for multiple colleagues, which served as a tipping point for me,” he said. “I determined I had to do something else besides patient care, so I set out to get my MBA. Although at the time, it wasn’t clear how the MBA would help, I was confident that it would open a few more doors in my career.”

Prior to the start of each semester he recalls sitting down with his staff and working out his patient schedule to allow him to take the required courses for the MBA program at SIU’s College of Business. The challenge was to make Sinha’s course schedule work with his patient schedule for the two years needed to complete the degree. With the help of his staff and support of his family, he managed to balance both.

Upon completion of his MBA, Sinha accepted a job as the director of primary care with the Department of Veteran’s Affairs hospital in Marion, Illinois. His work there opened the first of many doors in the field of administration, performance improvement and healthcare policy.

He next served as the director of managed care at the Department of Veteran’s Affairs health system in Maryland, and had the additional responsibility of chief quality officer for his network of hospitals covering Maryland, West Virginia and Washington, D.C.

Various opportunities allowed him to subsequently work for the United States Department of Health and Human Services at the Centers for Medicare and Medicaid Services in Washington and as a Medical director for public health policy with Pfizer in New York and Washington.

Though he left southern Illinois in 2001, he maintained ties to the area through family as well as with SIU as a life member of the alumni association and as an external advisory board member for the College of Business administration.

“Getting my MBA from SIU was the foundation for the many changes over my career which have allowed me to experience and positively influence multiple facets of healthcare,” he said.

Sinha also remembers advice he received during his time at SIU that he says he has applied to every career move he has made. He recalls a guest speaker from Chicago came to speak to his class about career advice.

Unlike most of his classmates, Sinha already had a successful career, so he was doubtful he would learn much from the presentation. However, the speaker shared about his first interview and how he hoped to get a job in finance but the job offered was in human resources. But, he knew he wanted to move to Chicago and this was a path to get there. So, he said yes to most of the questions and landed the job in Chicago.

“The advice he gave was something I never forgot. He said if you feel strongly about accomplishing something, the answer is always yes and the rest you will figure out,” Sinha said. “In my career, every position has been new and something I had not done before, but I always knew I could figure it out. And I have – just by saying yes.”

If you would like to join Sinha in supporting the College of Business, visit https://siuf.org/giving/college-unit/business.php.