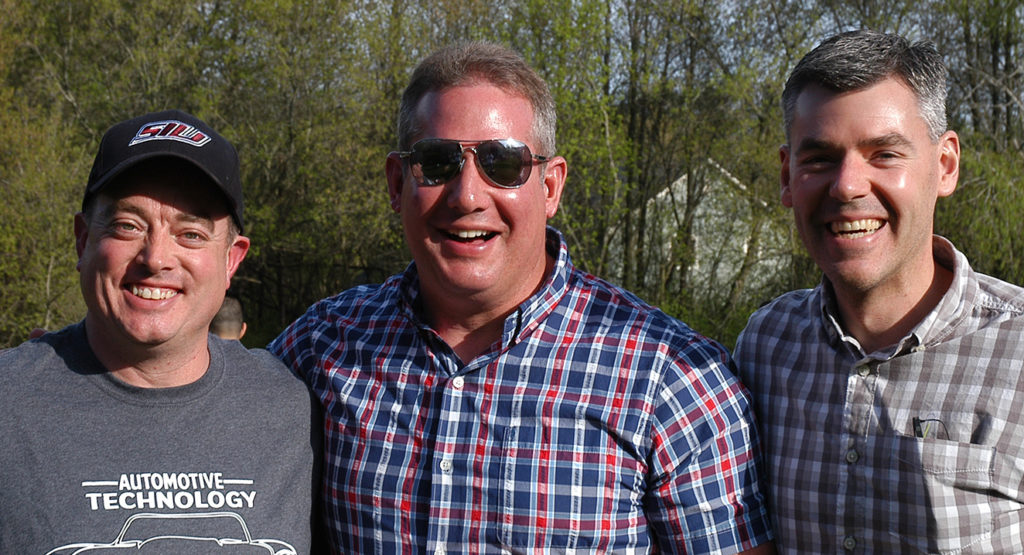 The paths of Zac Winstead, Bryan Jenkins and Dan Corey converged at SIU’s automotive technology program in the late 1990s. All three grew up in small towns across Illinois and Indiana and each had an affinity for automobiles.

When they arrived on campus, they immediately knew it felt right. Jenkins remembers coming down to Carbondale with his parents and feeling that instant connection.

Their introductions to one another came through their vehicles. “At first, we didn’t know each other’s names, but we knew each other’s trucks, “Corey said. “I drove a 1989 Chevy S-10, and Bryan drove a 1971 Chevy C-10 and Zac drove a 1977 F-150,” Corey said. They eventually became close friends, spending weekends together singing karaoke at a Carbondale establishment known as Key West.

“In the 1980s, there was a country music group known as the Highwaymen with Johnny Cash, Waylon Jennings, Willie Nelson and Kris Kristofferson,” Winstead said. Each of us had our own connection to the group. Although we could not sing like them, we had a great time trying.

After graduation, they began their careers and the work took them on different paths across the country to California and Louisiana and, eventually, Michigan.

“If you are in the automotive industry, most roads eventually lead back to Detroit,” Jenkins said.

The friendship has lasted well over the course of twenty-five years. Their bond has only grown stronger now that they all live in the Detroit area.  Winstead ‘01 is a director at Ally Financial. Jenkins ‘01 is a manager of Ford’s hotline department and Corey, ’01 and ’02, works as a service representative for Hino Trucks, a Toyota truck division.

The three also maintain a bond with SIU. Corey often returns to SIU for visits when he delivers trucks to southern Illinois. Jenkins serves on the SIU automotive technology program’s advisory board and Winstead has stayed in touch with many of the program’s leaders, such as Michael Behrmann, chair of SIU’s Automotive Technology Department.

Behrmann says their bond is not uncommon in the automotive technology program and many alumni stay closely connected beyond graduation.

“The careers for Zac, Dan, and Bryan led each to different corporations and different parts of the world. Their ties with SIU Automotive and each other continued over the years. Today, their careers have located them close together once again,” Behrmann said.

While many donors wait until the end of their careers to give back, Winstead, Jenkins and Corey are giving back now. Each is donating $500 every quarter for the next five years. By 2024, they will have funded an endowed scholarship of $25,000. Preference will be given to a student who has demonstrated success in the SIU Automotive Program and who has worked in the automotive/transportation industry. A demonstrated knowledge of the Highwaymen will also be a relevant factor.

“Our goal in setting up a scholarship is not to reward the best and the brightest students. We aren’t necessarily looking for a 4.0 student. We are all fortunate enough to enjoy what we do and want to help other students just like us,” Jenkins said.

“Looking back, those were the best four years of my life and I would go back and replay it all in a minute. SIU was a setting that helped me prepare for real life and real experiences,” he said. “I just want to give that experience to someone else.”

For Corey, SIU changed the trajectory of his life.

“It was a beacon that let our lights shine. SIU gave us all the opportunities to do what we love in an industry we didn’t know existed. In the towns where we grew up, there was no path to get there,” he said.

Behrmann is appreciative of the gift and hopes other Salukis will follow in their footsteps.

“The Highwaymen Automotive Scholarship will encourage our students to continue working hard and striving to become their best while also providing much needed financial assistance. It demonstrates the Saluki family support for their future success.” Behrmann said.

To donate to the SIU Automotive Technology program, visit foreversiu.org/colleges-units/applied-sciences-and-arts.