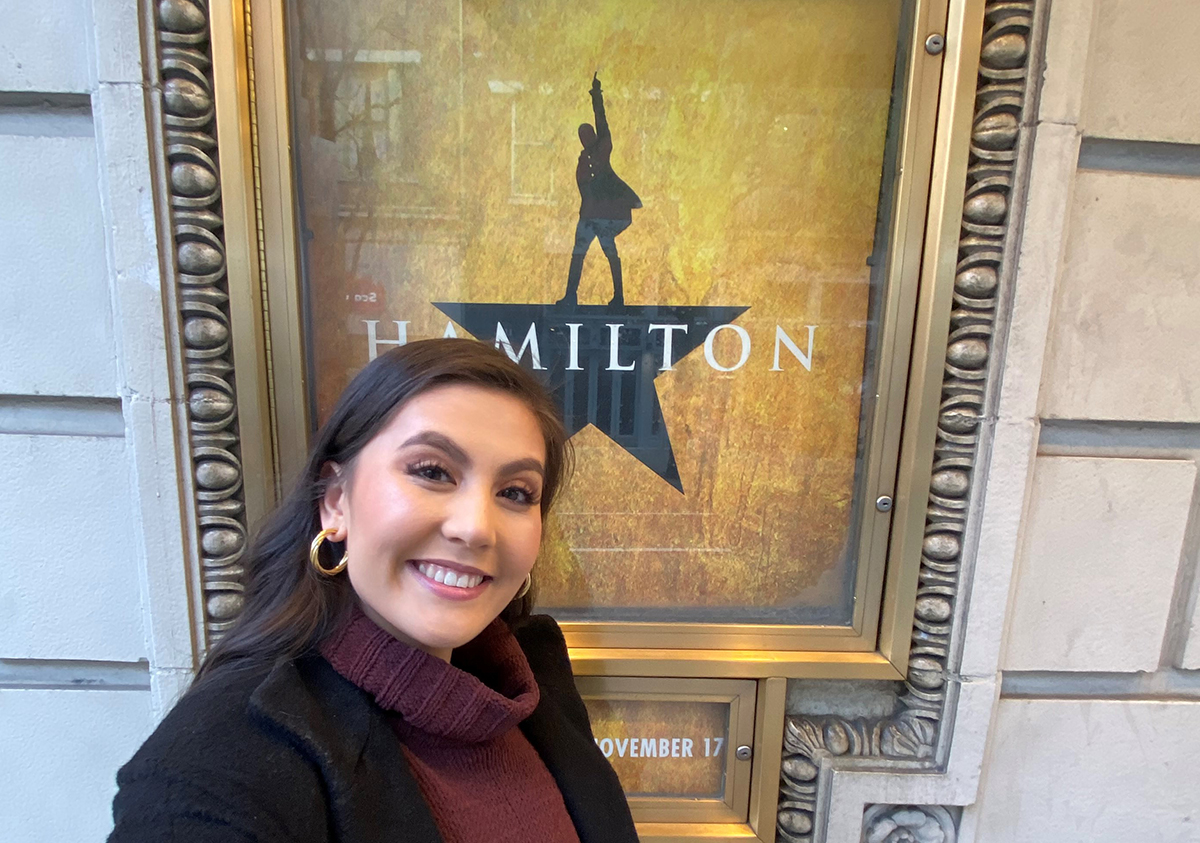 Zoe Jensen snaps a selfie outside the the Forrest Theatre in Philadelphia, the first stop of her ‘Hamilton’ production.

A couple of years ago, Zoe Jensen was an SIU senior pondering her future. Now, she’s playing Eliza Hamilton, the lead female role in a national tour of the world-famous Broadway musical “Hamilton.”

The path to her dream role started in Rockford, where she took violin lessons at a young age, participated in high school sports and the performing arts. She originally considered journalism as her college major but decided to apply to musical theater programs, too.

“I went to the annual Illinois High School Theatre Festival and decided to participate in auditions,” she said. “It was there that I met Tim Fink, the head of SIU’s musical theater department at the time. He told me all about the program, and I was sold pretty quickly. Tim explained to me how it was a small program at a big school, so I’d get a mix of a private and public school feel. This really appealed to me.”

Jensen received the Stuart Fischoff Excellence in Musical Theater Award, which is a $1,000 scholarship given to students who exhibit great potential for success in their careers. It was that potential Fink and J. Thomas Kidd, current chair of the Department of Theater, saw in her as well.

“Tom gave me my first professional job at the McLeod Summer Playhouse. I always enjoyed working with him because he would give me not only encouragement, but also things I should work on,” Jensen said. “As for Tim, I remember a time my senior year when he called me to his office, asking me what I was planning on doing after graduation. After telling him I wasn’t sure, he said, ‘You should go to New York.’ Before I could answer, he stopped me and said, ‘No, you need to go to New York.’ The confidence I felt from him at that time really impacted me and is partly responsible for where I am today.”

It wasn’t just Fink and Kidd who made an impact on her life and career, Jensen pointed out.

“I was so lucky to have so many supportive professors and mentors,” she said. “The great thing about a small program is that you really feel noticed by every professor. You don’t just blend into the crowd. The quality of SIU’s professors, students and productions is top-tier. My four years with them truly paved the way for my career today.”

A member of the Alpha Gamma Delta sorority, Jensen has many fond memories of her time in Carbondale. She sang the national anthem at her 2017 graduation ceremony and received her bachelor’s degree in musical theater. “There are so many days that I miss walking through the nature-filled campus or exploring Giant City State Park,” she said. “I really enjoy getting to come back and see productions, whether through the Department of Theater or the summer productions at McLeod Summer Playhouse. I strongly encourage anyone with a love of music to head to one of SIU’s shows.”

After graduating, Jensen first worked as an actor at the Children’s Theater of Cincinnati. She moved to New York City shortly after and landed a role in the off-Broadway show “We are the Tigers,” a pop/ rock horror musical.

“From that, we recorded an official cast recording, which has definitely been a highlight of my career so far,” she said.

She made her Broadway debut as a cover for the two principal girls in “Dear Evan Hansen,” which won the award for Best Musical at the 2017 Tony Awards.

“A few days into my first week at ‘Dear Evan Hansen,’ I found out I booked Eliza Hamilton, the female principal role, in the national tour of ‘Hamilton,’ which is arguably the biggest and most impactful musical in the world right now,” Jensen said. “To say that I was honored, emotional and so grateful would be an understatement.”

Currently, there are two tours of “Hamilton,” and Jensen is on the Angelica tour, named after another prominent female character in the play, which has done more 1,000 shows nationwide.

“It’s the same production, music and choreography as the Broadway show, we just put it in a few trucks and are bringing it to cities around the country,” she said.

Her tour travels across large swaths of the country, including a six-week stop in May 2020 at the Fabulous Fox Theatre in St. Louis.

“I am so excited to be able to bring the show to St. Louis, because not only is it a few hours from home, but it’s so close to my alma mater,” she said.

With music and lyrics written by Lin-Manuel Miranda, “Hamilton” became a cultural phenomenon shortly after its 2015 debut.

Inspired by Ron Chernow’s 2004 biography of one of the nation’s Founding Fathers, the show uses hip-hop, R&B and soul, along with traditional-style show tunes. In 2016, it garnered a record-setting 16 Tony Award nominations, winning 11, including Best Musical.

“It’s the most beautiful, touching, difficult, intricate production I’ve ever been a part of,” Jensen said. “We at the company lovingly call it a ‘monster’ because it’s incredibly difficult with its many moving parts, but so, so worthwhile. This production has really taken the world by storm. It is a perfect mix of telling a story of someone incredibly important in American history while also staying relatable and giving it a fresh look with its hip-hop music and dance.

“It is a story of an immigrant who came to this country with a dream of success, worked his way to the top, had a family, made a handful of mistakes along the way, and finished his life with a legacy. That kind of story isn’t just touching in the 1800s.”

“Hamilton” is also well-known for its diverse casting choices; which Jensen believes has only increased the show’s impact.

“I am a proud half-Filipino woman, who as a kid, didn’t really see a ton of actors who looked like me on stage,” she said. “It is an absolute honor to be representing diversity in our theater community alongside my castmates.”

Tickets to any national “Hamilton” performance can be purchased at hamiltonmusical.com/us-tour/tickets.