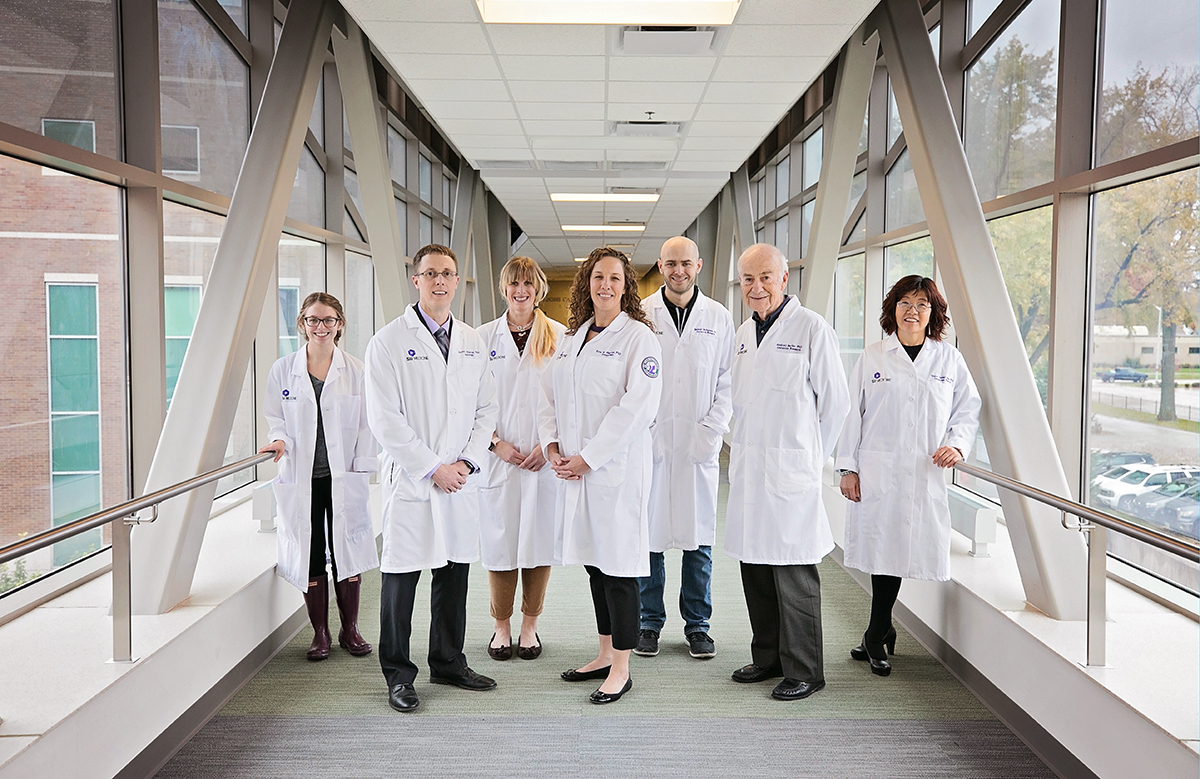 Erin R. Hascup, Ph.D., (center) who serves as the center’s director and as a part of the faculty in the Neuroscience Institute at SIU School of Medicine, is surrounded by her colleagues.

“As longtime Springfield residents, we’re proud of the impact the School of Medicine has had on the community,” Dale Smith said.

That impact prompted Dale and his wife, Deborah, to donate a substantial financial gift to the Alzheimer’s Center at SIU to expand research, enhance programming and improve care for people with Alzheimer’s disease and assist their caregivers.

“The efforts of the Alzheimer’s center inspired us to give and hopefully create a consciousness within the community around the breadth of research and patient care we have here,” Dale Smith said. “Alzheimer’s is a terrible disease, and we hope our gift can help researchers at SIU Medicine produce better clinical outcomes that improve our community, one family at a time.”

The center is now named the Dale and Deborah Smith Center for Alzheimer’s Research and Treatment at SIU Medicine. This gift will transform the health care of people throughout Illinois and beyond.

The center provides clinical care, research and community programs throughout 93 Illinois counties. Since 1986, its employees have diagnosed, treated and educated Illinoisans with Alzheimer’s and similar conditions and their families. In the past year, the center, along with its Memory and Aging Network, has served more than 4,000 patients and their families. The National Institute on Aging of the National Institutes of Health has awarded more than $7.2 million in grants to the center for Alzheimer’s-related research in the past three years.

“This gift from Dale and Deborah Smith will continue to propel research at SIU that may translate into novel treatments and interventions for patients in the future,” said Jerry Kruse, M.D., MSPH, dean and provost at SIU School of Medicine. “It will also provide much needed clinical, educational and community support for those with Alzheimer’s and their families.”

Despite decades of pharmaceutical development and drug testing, Alzheimer’s disease continues to be incurable, and prevention may hold the greatest hope for combating this disease. The research team is focused on discovering ways to stop the progression. In addition to a better quality of life, early and accurate diagnosis and timely intervention could save up to $7.9 trillion in medical and health care costs, according to the Alzheimer’s Association.

Erin R. Hascup, Ph.D., serves as the center’s director and as a part of the faculty in the Neuroscience Institute at SIU School of Medicine. She is an associate professor in the Departments of Neurology and Pharmacology.

“What we want to do is understand the changes that are occurring across disease progression, including in the very early stages,” she said. “Many have Alzheimer’s for up to 30 years prior to cognitive decline, so we want to intervene earlier to slow or stop disease progression and improve patient outcomes and quality of life.”

The center’s Beyond the Medical Center program also focuses on creative ways to improve the quality of life for both patients and caregivers through art therapy, music therapy and movement for individuals with dementia.

Springfield-area caregiver Janet Scott and her husband are two of the more than 4,800 patients and caregivers who have participated in one of these programs in the last two years.

“I cannot imagine what my life would be like had we not come here,” she said. “SIU has meant everything to me. They’ve been like my third arm; I’ve depended on them for so much.”

Currently, 5.7 million Americans are living with Alzheimer’s. By 2050, this number is projected to rise to nearly 14 million. Illinois communities will continue to be impacted by various forms of dementia as the population ages, and the Smiths are eager to be a part of the solution locally and beyond.

Gifts received by the SIU Foundation support the growth of the School of Medicine, including its medical research efforts.